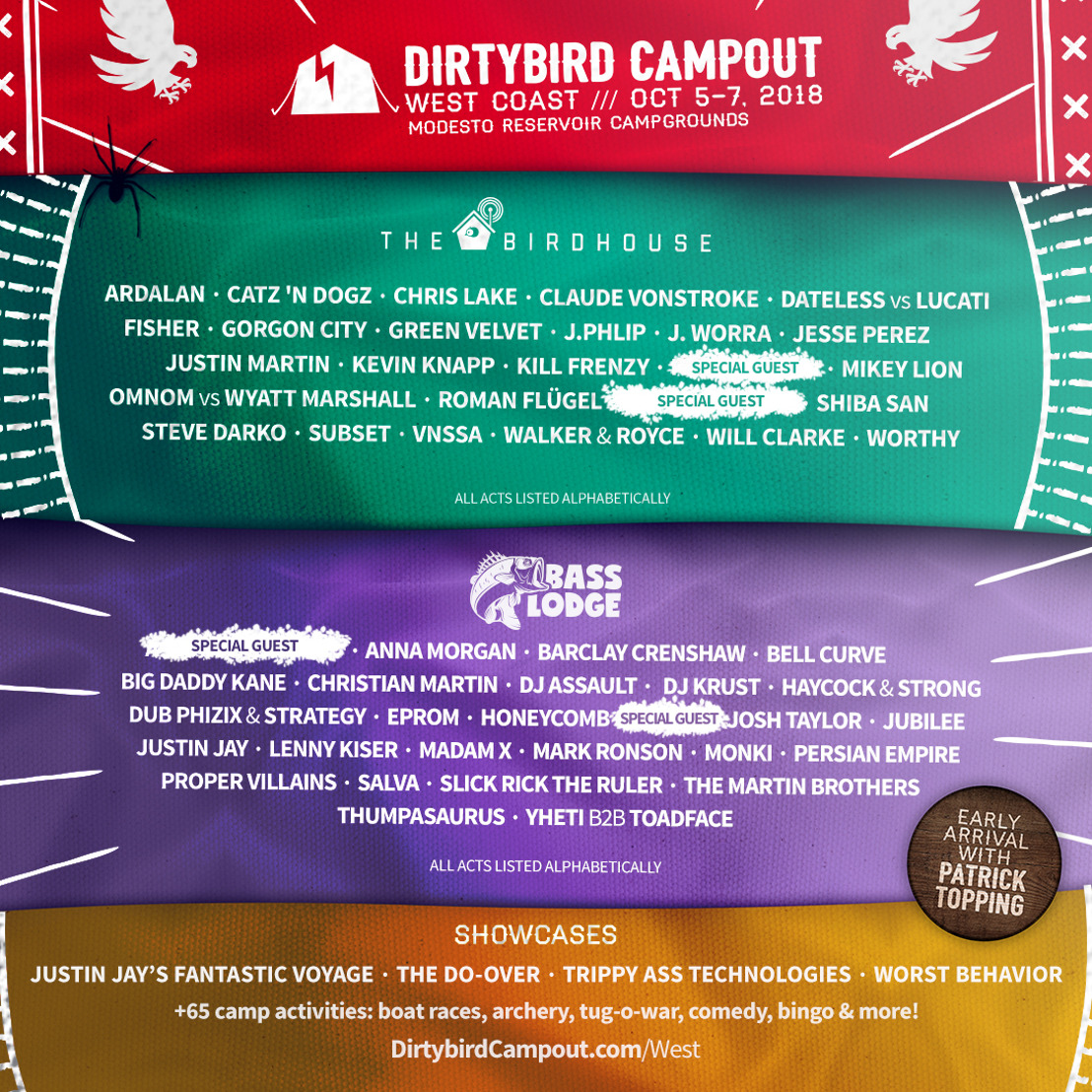 Today, Head Counselor Claude reveals the lineup of his fellow Counselor cohorts who will be soundtracking the nostalgia-inducing holiday weekend away, featuring a slew of DIRTYBIRD friends, family, and favorites. Split between two stages - music will stretch from house to techno, hip hop to bass, DJs and live acts - a complete look into VonStroke’s record box and his fun-loving, yet cutting edge and eclectic taste.

And of course the DIRTYBIRD flock will be in full force with special sets from Claude VonStroke, Justin Martin, J.Phlip, Christian Martin, Worthy, and Ardalan plus a The Martin Brothers Jungle Set for the ages.

First things first for campers - heading straight to Games HQ to be assigned your Color Team led by the outrageous Team Leaders. Then it's off to earn points all weekend long in one of more than 50 activities from sack races to kick ball, at arts and crafts and archery, to the return of costumed boat races and even earn color team points at lapdance for your life. The competition is fiercely fun and with inhibitions left at the gates and sights set on winning the Iron Bird Championship, Campers spend their days getting pegged with dodgeballs by Christian Martin, catching comedy with Counselor Claude, chowing down on cheesy pies with Justin Martin, sinking cornholes with Ardalan and, of course, tearing up the dance floor to the strains of electronic music’s finest.

Dirtybird Campout West Coast 2018 will land at Modesto Reservoir Campgrounds in Central California, offering a lush lakeside camping experience convenient to Northern and Southern campers alike, as well as to major airports for the out of town Birds. Just miles away from the vast Yosemite National Park, Campers will be treated to a beautiful lake ripe for swimming and fishing, beachfront camping and stages so close to the water you can booty shake while you dip those toes, grassy areas for your favorite games and all the amenities you’d expect from the perfect Campout venue, plus a slew of nature focused activities for anyone looking to escape the big city bustle for the weekend.

It has been the intimacy of the Campout experience that has made it a favorite amongst Campers - and 2018 will be no different with campsites being just a quick hop from the stages and its various attractions placed closer together to make sure that no one is missing out on the fun.